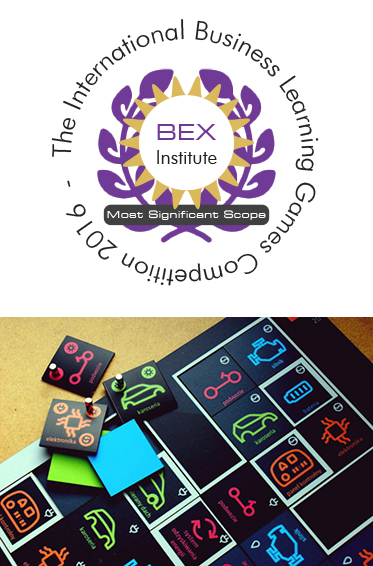 On November 25th in Dublin the formal award ceremony for BEX International Business Learning Games Awards took place. It was the culmination of the competition organized by the Business Execellence Institute, in which Pracownia Gier had also taken part.

The organizer’s purpose was to give the possibility of gaining feedback  and constructive criticism to candidates in the educational games branch about their products as well as to promote games on the global market.

Projects were judged by an international jury, specialists from the field of business, education, and game design, who, in their judgements, followed criteria such as: educational value of the game, quality of learning delivery, game mechanics, and game context.

The first award, 2016 Game of The Year, was won by the Spanish game Pacific. autoKOREKTA won the award for the category of Most Significant Scope 2016, while the award for most original game was given to the Norwegian product Playing Lean.

We heartfully congratulate the winners and all participants of the competition!

The title obtained during the BEX International Business Learning Games Contest is not the only one which Pracownia Gier holds.

We’ve received the main awards in the most pretigious international game design competitions such as Game Design Competition 2009 and 2010 organized in Washington during the conference for The North American Simulation and Gaming Association (NASAGA) for the games Strike Fighter and A Matter of Time.

In 2010 we received the title OCDE Innovative Firm and the Ministry of Economy, in 2011 – Award II and title Young Innovative Firm in the competition Mazovian Innovator 2011, and in 2015 Knowledge Brokers, a presentation and article about educational games for public administration, won first place in the 46th International Simulation and Gaming Association’s conference (ISAGA) in Kyoto.