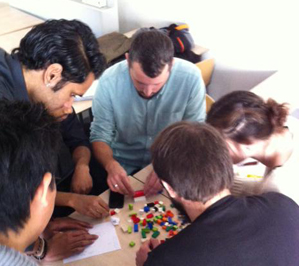 On October 17th 2014 Joanna Średnicka – Pracownia’s research and game design expert – gave a lecture on “Design Thinking and game design. How to design powerful simulations?”, which would be perfectly normal but for the fact it was conducted from Warsaw on Skype. The 1,5-hour lecture was delivered to 24 listeners (students from various countries) within the frame of a course on game design at Delft University of Technology.

Joanna Średnicka presented PGS game design  method and our experience within this field. She also described different stages of the game design process that each design team has to overcome. For the first time ever  the Sunflower Tower game was played remotely.

Heide Lukosch from Delft University offered an interesting summery of Joanna’s lecture: “All I can say is that the lectured had a very good response from the students. They had a lot of fun while playing the game, listened to Joanna’s comments and watched the film very attentively. I think that they were particularly interested in the presentation of the game design stages. A week ago two groups working within a team were conflicted about how to proceed and which ideas to choose to move forward. They were certainly relieved to hear that it was perfectly normal during the design process. It helped them a lot.”